If we would have to say what company is currently managing to improve their current models most, the only pick would be Chevrolet which released in the last few months at least a dozen of new or improved models. One of these is the 2017 Chevrolet Colorado Xtreme which was released at the Bangkok Auto Show in the late March.

This means that unlike the ZR2 concept truck which is quite similar to it, the Xtreme model will not come on the North American market anytime soon which also means that Chevrolet Sales Thailand did have a lot more room to improve their new concept truck.

Just like with the ZR2, the Colorado Xtreme is based on the usual version of the truck but with a lot of improvements inside and out. At this point in time there are rumors which suggest that it will never be put into production and even Chevrolet said that the truck is just a design study. However, considering how much attention to details they put into the car we do think that even though they will not release the model on the market, some of its features might be offered at a later date as dealer installed extras.

The head of design for GM International said that the truck has been developed and engineered while looking at the one designed for the US market which also means that it now boasts quite a few new features and design additions different from those of the usual model. The front end has been completely revamped and it now takes a boxier appearance, similar to that found on the US Colorado.

On top of that, the front and rear bumpers are new, and unique to the concept truck, but the headlights, grille and even the mirrors have been restyled to look more like those of the US market model. 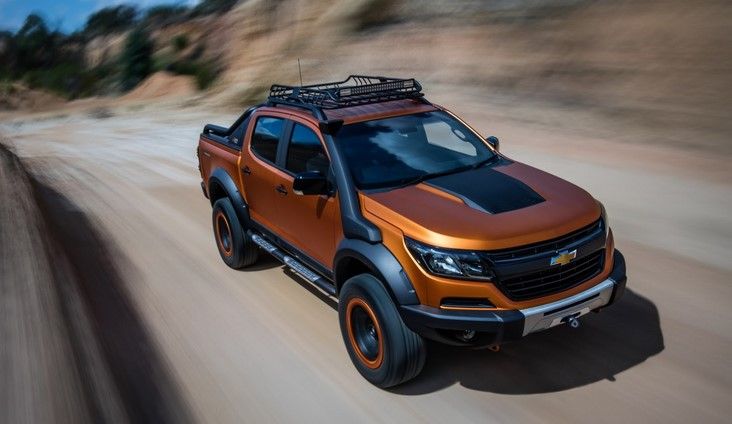 The 2017 Chevrolet Colorado Xtreme also comes with flared wheel arches, large 18 inch rims with high performance off-road tires, larger side rails, a roof-mounted rack with a light bar, a modular bed-liner and a massive hood scoop in the front. The color of choice is bright orange and even the beads on the wheels have been painted orange in order to fir the scheme. The spare tire has been mounted in the bed while the front received a large skid-plate.

Unfortunately the interior of the Xtreme is pretty much unchanged over the US model but it is new for the International version. The only real notable feature here is the two-tone color scheme which includes the upholstery as well as the dashboard and instrument cluster.

So far GM International hasn’t said much about what engine powers the new 2017 Chevrolet Colorado Xtreme and its upcoming regular version. However, if we had to guess we would say that the truck will be released with the same engines as before with only the diesel receiving minor upgrades in order to become more efficient and slightly more powerful.

The base model will stick with its 2.4 liter unit in Brazil or the 2.5 liter inline 4 in all other markets. A V6 model is also going to be a choice in Australia as well as a few other markets while the 2.8 liter diesel unit will likely be offered across the World in order to meet the demand for diesel powered trucks.

Rumors say that this engine will now get a boost to around 197 horsepower and 369 lb-ft of torque, a 16 horsepower improvement which should translate in a slightly better on-road behavior as well as better fuel consumption at cruising speeds. The truck’s gearbox and most of the running gear will be the same though.