The all new Super Duty series has been released a few months ago in Texas and it is every bit as good as the rumors were saying. Not only it uses the brand new aluminum construction Ford introduced on the smaller F-150 trucks, but it is also coming with a much improved chassis, improved engines as well as a better running gear than before.

Unlike most other small trucks, all of these changes are there to make the truck a better workhorse that will handle a lot more before it will give in. in order to see how good the Super Duty might be, we are not going to take a look at one of its highly expensive models but rather one of the cheapest ones money can buy, the 2017 Ford F-350 Regular Cab which is more expensive than the F-250 and that’s about it.

In terms of looks, the 2017 Ford F-350 Regular Cab is as plain as it gets but the design can be easily recognized especially since it has been seen on most of Ford’s fleet trucks in the past few decades with the refrigerator-white color and the plain steel wheels. However, these mean that most of the money went under the hood and under its skin which is all it matters for a truck like this.

The Regular Cab part of the name means that there are only two doors and a short cab but the truck can be had with a long bed as well as with dual-wheels in the back. The latter will allow it to tow as much as 22,000 pounds when equipped with the diesel engine and carry more than 6,000 pounds in its bed, basically allowing it to carry its weight five more times.

Inside the cabin, the Regular Cab model is as barren as its gets so the basic model doesn’t really come with anything besides an air conditioning unit and a basic radio. Some optional extras will add a trip computer, more durable vinyl seats, a leather-wrapped steering wheel as well as heated mirrors and windshield.

Engine wise, the base 2017 Ford F-350 Regular Cab is available for sale with a 6.2 liter naturally aspirated V8 which makes just as much as in the previous version of the truck at 385 horsepower and little over 400 lb-ft of torque. However, those looking to get more out of their truck and to benefit from a more reliable and fuel efficient engine, the 6.7 liter turbocharged V8 diesel is the one to have.

This will be the one able to tow those massive weights without even breaking a sweat. The only gearbox of choice here is a 6 speed automatic which can be ordered with a PTO for the diesel version of the truck. This will allow its driver to mount a snow blower or even a large winch that will be driven by the main diesel engine. 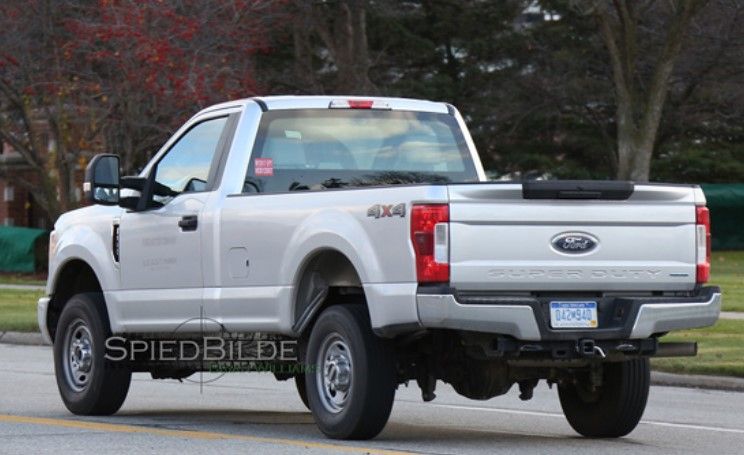 For the price, there are only a couple of color options and interior equipment available but the most important features are there. The buyer will get the chance to choose what type of chassis it wants as well as the engine. Also, while it is the least expensive of the lot, the Regular Cab model can be had with pretty much all the performance upgrades usually found on a higher end model.

The price starts at just over $30,000 for a base model and it will get closer to $55,000 for a diesel version with the higher end chassis upgrade.