All of the VW-Group crossovers have been based on the old MLB platform which was great at its time but since then it aged quite a bit. The first crossover to get the new platform was the Q7 and now the Touareg and the 2018 Porsche Cayenne will follow shortly. Just like with the Q7, the new Cayenne is expected to lose more than 200 pounds in the heaviest trim level and as much as 500 pounds in the lower end versions.

This will be possible thanks to the all new modular platform which will allow Porsche to strengthen some components while not adding any weight.

Also, the new platform will mean that the car will likely get new more efficient engines as well as slightly different exterior proportions. If we had to take a guess, especially since the model spied a while ago was just a development mule, then we do think that the new Cayenne will likely get a slightly longer wheelbase in order to give its passengers more space as well as a slightly lower and wider body.

Inside the cabin it is safe to assume that the 2018 Porsche Cayenne will share a large part of its design and components with the Panamera series of cars. The rather wide and high center console will very likely be kept but the car’s instrument cluster should be all new, the seats will be more supportive and will offer higher levels of adjusting while the space inside the cabin should be improved considerably, especially for the rear passengers.

Also, thanks to the new platform and the complete deletion of its spare tire, the new Cayenne could feature an up to 40% larger trunk than before.

On the exterior, the car will very likely seem like more of an evolution than a completely new model and this should be clear for everyone, especially since most of Porsche’s lineup has been using the same recipe for a very long time. In the front the car will likely get some of the design traits found on the Panamera Sport Turismo concept while in the back it might get a more similar design to what can be found on the smaller Macan.

Under the hood of the 2018 Porsche Cayenne we should see a mix of new and old engines that will make it faster and more efficient mostly thanks to the weight loss it will receive. The base engine this time around has been rumored to be a newly developed 2 to 2.5 liter inline 4 turbocharged mill which could also be offered on the Panamera. This would be able to offer up to 300 horsepower and more than 280 lb-ft of torque and it should be more than enough to replace the old V6.

Further up the range, the S models are likely going to get a newly developed 3 liter twin-turbocharged V6 with anything between 400 and 500 horsepower while a Turbo or Turbo S model could offer as much as 600 horsepower and more than 600 lb-ft of torque from a new 4 liter twin-turbocharged V8. All engines will likely get either an 8 speed automatic or a newly developed 10 speed unit.

In any case, all wheel drive should be offered as standard with the only exception being the least powerful engine which will only be available in Europe and it will only get rear wheel drive. 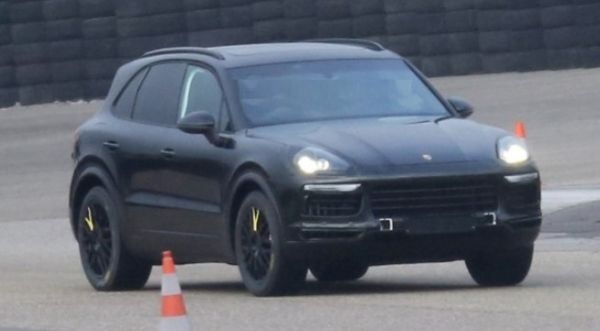 All of these should be first showcased next year at the Geneva Auto Show and the car will likely hit the market a few months after that. In terms of price, the Cayenne should cost between $60,000 for a base model and more than $100,000 for one of its top end versions.

The major competitors are BMW X5 and Mercedes GLS.