The Armada is a full-size SUV which has been based on the Titan pickup truck up until the 2015MY. However, just a few days ago Nissan announced and showcased the all new Armada which is a completely different car. While we first expected it to get the same underpinnings as the all new Titan as well as a similar engine and design, the new model is actually based on the Nissan Patrol Y62 which has been around since 2010 in one form or another.

This means that the new Armada is not entirely new but despite that, it is a very impressive machine nonetheless.

While most of the details are still unknown, the car is expected to hit the market in two different models, one of them being the 2017 Nissan Armada Diesel. Just like its name suggests, this model is very likely going to get a V8 diesel which should provide the US market with the much needed diesel full-size SUV many are craving for.

Design and chassis wise, the car changed completely from the last model and the interior is a lot better thanks to the fact it is no longer based on a truck.

Engine wise, the 2017 Nissan Armada Diesel will definitely get the same powertrain that powers the all new Titan. This will be a 5 liter turbocharged V8 diesel which will be provided by Cummins. Some people suggest that the engine in this particular model will offer a slightly different output than the truck version.

We expect it to offer closer to 360 horsepower and 500 lb-ft of torque which should still be more than enough in order to allow a good driving experience and towing capability without any of the usual diesel disadvantages. The only transmission of choice, for this particular model, will likely be a 6 speed automatic which will drive either the rear or all wheels via independently lockable differentials.

A lesser diesel version has also been rumored for some time now but it would be highly unlikely considering that the Armada will weigh more than 6,000 pounds in certain trim levels which will easily make it the heaviest in its class and one of the slowest cars out there.

Design wise, the all new Armada is nearly identical to the international version of the Patrol. The car shares its glasshouse, most of the bodywork as well as certain features such as the V-motion grille or its rear end which is carried over almost completely. However, the Armada does get new headlights, all new 20 inch painted aluminum wheels wrapped in higher performance tires as well as new color schemes.

Luckily, the massive amount of chrome used on the Patrol seems to be gone and instead Nissan is using dark accents on the grille and side-window trims while the body-colored fenders have been changed for matte-black ones which really elevate the design. 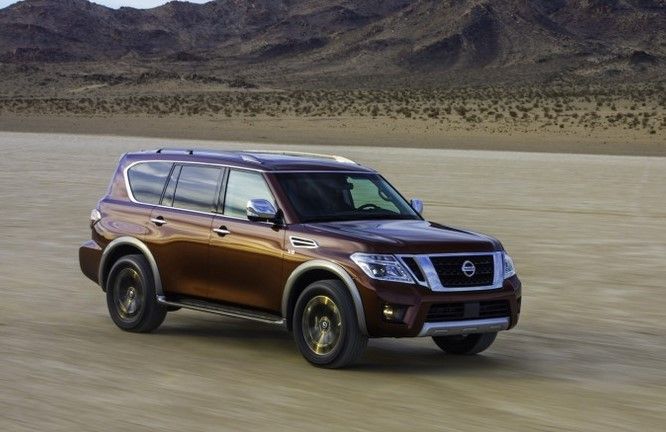 While we did expect a new interior for the new 2017 Nissan Armada Diesel, the car is actually identical to the International Patrol all the way down to the smallest details. The seats, dashboard and even equipment level are all the same. The infotainment system is new on the Armada but this will very likely be carried over to the Patrol in the near future as well.

The car is offering up to seven seats and some versions will be available with real wood inserts and a leather-wrapped interior. The price is still unknown at this point but considering how much the Patrol costs and how inexpensive the previous model was, we do expect the new Armada to cost closer to $50,000 which will also make it just as costly as the Yukon or the Expedition.

The major opponents are Mazda CX-9 and Toyota Sequoia.